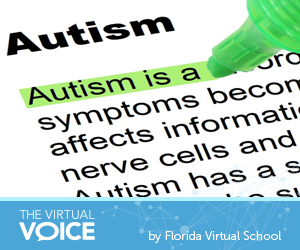 April is Autism Awareness Month, so I decided to do some reading and brush up on the subject of autism.

In doing so, I came across a surprising blog post about the negative connotation of the puzzle pieces that represent autism in the Autism Society’s ribbon logo, which is now widely used to create awareness of Autism Spectrum Disorder (ASD).

The post called my attention for two reasons. First, I had no idea that the puzzle ribbon was so controversial, and second, it was written by an autistic person – so naturally I was interested in reading about her particular point of view. In her blog, Alex says that the puzzle implies that autistic people need to be figured out, fixed, or completed as if parts of them were missing.

She also points out that the colors and the very concept of a puzzle seem childish and excludes a very large group of adults that are autistic. Well, she definitely has a point and I had never really viewed the logo as anything other than what the Autism Society website says: that it represents the complexity and diversity of autism and that it signals hope through research and awareness. Now that I see another point of view, I better research some more…

Which side to take?

Before forming an opinion, I decided to look at some more articles. Alex’s post led me to Melanie Yergeau’s blog. Melanie has Aspergers, and in her blog she does an amazing job explaining how being autistic or an “aspie,” which is the term she sardonically uses in her blog, are one and the same. Just like Alex, Melanie also feels stereotyped by the puzzle, using the phrase “people NOT puzzles!” This compelled me to dig deeper.

Page after page, I kept running into both sides of the argument. Interestingly enough, the loudest voices in all the articles, blog posts, and comments I read were those of autistic people. Many agree with Alex and Melanie and some really don’t mind the puzzle pieces – defending the fact that it does raise awareness, which should be the common goal of all these organizations. However, one comment hit home. It said that even though so many autistic people have reported that they find this symbol hurtful, it continues to be used as a representation of autism.

Maybe we need to try to speak less and listen more to our autistic population.

As I read more about what ASD is, I was blown away by the sheer amount of information about the indicators of this disorder and how many types and degrees there can be – the “spectrum” we hear so much about. As much as I thought I knew from my training and experience as a teacher, my knowledge seemed to shrivel like Pluto next to our Sun the more I read.

I personally feel that if there is a piece missing it is me – I need to learn more and educate others as much as possible so that we know how to relate to autistic people when we meet them. Hopefully, by overcoming our ignorance we won’t make them feel like a puzzle, but a part of the big picture.

What do you think?

What are your thoughts about the puzzle ribbon logo? Leave your comments below.

Rose Rodriguez is a passionate educator with more than 15 years of hands-on experience in the classroom, both traditional and virtual. Rose truly believes that education can be transformed one student at a time and strives to bring the FLVS vision to life through innovation and the reinvention of education every day of the school year. View all posts by Rose Rodriguez →

This entry was posted in Parent Edition and tagged Aspergers, Autism, Autism Awareness, Special Needs on April 25, 2016 by Rose Rodriguez.