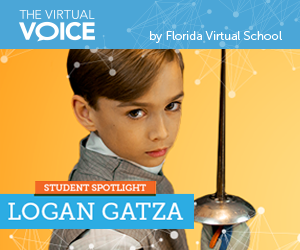 He quickly became a top ranked fencer in two fencing weapons, so he started competing in modern pentathlon in January 2014. This summer, he had the honor of representing Florida in the USA Modern Pentathlon National Championship, where he took the silver. He also got to attend a prestigious training camp at the Olympic Training Center in Colorado.

Logan knows that practice makes perfect. He learned from his coach that his weakest sport was swimming. Instead of accepting that, he started extra training. In a few short months, he was able to shave 40 seconds off his 50m freestyle time!

“Every morning the month before competition, I would swim and run to get ready,” said Logan.

Logan is also a great student. At his elementary school, he made straight A’s and a 5 on both sections of the FCAT. In addition to his normal school work, he took a class at Florida Virtual School.

“The M/J Business Keyboarding class taught me how to type with two hands, so now I can type faster!” he said.

As he looks toward the future, he is motivated by his supportive parents, inspiring coaches, and Cub Scout training. Logan said he has plans to train for the Olympics, as well. He said, “I will probably take more classes with FLVS because of my training.”

FLVS is definitely proud to know an Olympic athlete in the making. Logan, we wish you the best as you continue your amazing journey!