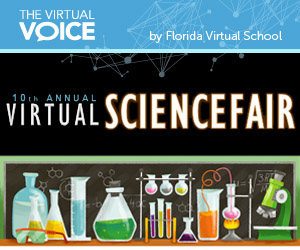 Are you a Florida Virtual School student with a knack for science?

Then you should consider entering the 10th Annual Virtual Science Fair (VSF) at Florida Virtual School!  The Virtual Science Fair offers students a chance to participate in student-led experiments. Top placing students will advance to the Dr. Nelson Ying Orange County Science Exposition, along with the potential to earn various awards, prizes, and scholarships.

Last year, FLVS student Jillian Hanley advanced to the State Science & Engineering Fair of Florida, earning an $84,000 scholarship along with a number of other cash awards!

Students are invited to attend an informational online meeting to learn more on either of the following dates:

For the meeting link and more details, visit the VSF website.

The FLVS Virtual Science Fair was created to promote a real life scientific experience for our students. This exciting student activity encourages students to think like young scientists. Students that enter the VSF will participate in independent science research by designing their own science project that uses the scientific method to answer a question or solve a problem. Generally, students will have from October to early January to complete all aspects of their project. A virtual open house and online project presentations will be held in January with top placing projects advancing to the Dr. Nelson Ying Orange County Science Exposition along with the potential to earn various awards, prizes and scholarships. The VSF is open to all Florida Virtual School students in middle and high school, including those enrolled in FLVS Full Time, FLVS Part Time and FLVS Global School (if they have not competed in any other ISEF-affiliated fair in the same school year).

Students interested in participating in the VSF should begin by visiting the website and reading the VSF Getting Started, Expectations, Timeline, and How to Enter. Students may begin research on potential project ideas, however, experiments cannot be started until after VSF project approval in October 2015. Official entries will be accepted starting September 21, 2015, and no later than October 12, 2015, by 8PM EST.